I know everyone is scared. So many messages coming at us – how could we not be afraid for ourselves and/or the nonprofit sector with the dreaded Trump tax plan?

Well, I am here to tell you in a few words – don’t stress the unknown.  And guess what – the final tax bill that is bound to happen soon is STILL unknown.

If you are seeing nonprofit sector commentators making recommendations like donors should be fronting their gifts in 2017 to donor advised funds in anticipation of losing out on tax deductions in 2018 and beyond – my advice is to completely ignore it.

In fact, the way I am seeing things, the charitable income tax deduction may be one of the few deductions left intact and may be even more important in 2018 and beyond.

And, all of this talk about the negative impact on nonprofits of raising the standard deduction (because it may take some people out of being itemizers) is ludicrous! Those people who are barely itemizers are NOT your major gift donors.  They are the type of donors who will still send you a $50 or $100 a year annual check, regardless of the deduction.

So, don’t lose sleep over a tax law overhaul that is far from done and may end up benefiting the nonprofit sector.

See, that wasn’t so bad!

Probably not.  It doesn’t seem that the President and Congress are about to do anything together.

Ok, but what if all of the Republicans actually get in line (or a few Democrats defect…like that’s going to happen!!)?

Any problems with the most recent tax proposal for non-profits?

Here is a quick overview of potential issues that might impact nonprofits:

There is other stuff in it – the rest of which doesn’t yet rise to be addressed in this blog – here is a link if you want to read more: https://www.forbes.com/sites/janetnovack/2017/09/29/trump-plan-delivers-massive-tax-cuts-to-the-1-and-sharp-kick-to-upper-middle-class/#2f10cd861099

If you have ever seen my presentations, you would know that I subscribe to the 2% rule.  Americans in general give away 2% of their disposable income/wealth each year, roughly equal to 2% of the economy/GDP (see Giving USA for more on those numbers).  Since these percentages are very consistent, year in, year out, regardless of tax law changes, you have to believe that if anything  happens, it is not likely to impact charitable giving (unless it increases or decreases Americans’ disposable wealth or the overall economy). Even the so-called estate tax repeal doesn’t frighten me, and will probably be replaced with something confusing that I’ll be speaking and writing about it for years. 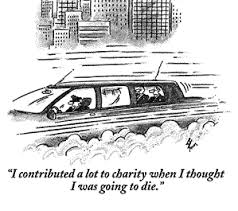 I hate jumping into tax policy debates too early – Trump isn’t President yet and we really have no idea how things will shake out with him and Congress, or whether Democrats will somehow block things (hard to see that as they are not in majority!).

But, a big but….  I just took a look at a good article on CNN/Money (looks pretty nonpartisan to me) comparing Trump’s tax reform ideas with Paul Ryan and House’s – pretty fascinating and a little scary for nonprofits.

I point you to one huge impact area for nonprofits – here is the direct quote from the article:

The House plan would eliminate all itemized deductions except those for mortgage interest and charitable contributions.

Trump’s plan, by contrast, keeps itemized deductions, but caps their total value at $100,000 for singles or $200,000 for joint filers, a more costly proposal.

Wow. Read that carefully.  The House plan would be AWESOME for nonprofits! Charitable deduction left along with mortgage interest!!!  No other deductions!

But, then read the second paragraph carefully (Trump’s idea): ouch!!  Capping deductions? What a DISASTER that would be for nonprofits. Remember: the rule of thumb is 80% of charitable funds come from 20% of the donors (or something like that).   Maybe this would be good for planned giving (sorry nonprofits, I know you don’t want to exchange today’s $ for tomorrow’s planned gifts)?

Here is another quote from the article that deserves some attention:

Today, individuals pay up to 20% on their long-term capital gains and dividends. And their interest is taxed at ordinary income rates — so, up to 39.6%.

House Republicans want to change that. Under their plan investors would deduct half of their gains, dividends and interest. That effectively reduces the top rate on that income to either 6%, 12.5% or 16.5%, depending on one’s tax bracket.

Cutting capital gains taxes is not good for planned giving, plain and simple.  That extra incentive – especially when it was at 20% or more in the 1990s – fueled planned gifts like CRTs and CGAs.  The rates have been low since 2001 and both types are on the downslide.

I’ll take Trump on this one!

Lastly, what about the estate tax?

Trump is on board with all three repeals, but his plan would tax people’s capital gains above a certain amount when they die.

I’m fine getting rid of the AMT and Obamacare. Not fine getting rid of the estate tax.  It is the easiest tax to avoid.  If it affects you, you are forced to think about whether you want to leave a charitable legacy (and still leave your heirs fabulously wealthy) or a legacy of a large payment to the IRS after death.  The incentive is still important to move people in the right direction.

If you are political junky like me – on tax and other issues – you have to be waiting anxiously for this inauguration to finally be over.